An Analysis Of Gwen Shamblin's "Essence Of God" Statement

Part 2: "The Judeo Christian View Of God And His Son" 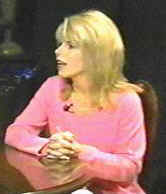 Let us now turn to examine the first part of Shamblin’s “Essence Of God” writing entitled “The Judeo/Christian View of God and His Son.” In all of the articles ahead, Shamblin’s thought and writing will be denoted by the italicized and colored font.

In beginning our examination of the various sections of Shamblin’s document on “the essence of God” we are confronted by the first of many of the contradictory inconsistencies she sets forth as Biblical truth.  A casual reading of this statement would lead one to believe that Shamblin has made a statement of Biblical truth, but what she actually appears to be saying here is a far cry from it. In fact it sets the tone for how just how inconceivably muddled her thinking would seem to be about the entire subject.

In a most peculiar departure from the diagram she’d just introduced, she now calls “God” the “Alpha and the Omega and the Beginning and the End” and cites Revelation 1:17, 21:6 and 22:13 as supporting prooftexts for this assertion. From the statement above, then Shamblin is identifying God as the One who “sent His only Son.” This could be none other than “THE GOD”, the “YHWH – The Great I AM.”

However, by studying the flow of the dialogue in these verses of Revelation, the identity of the One called “the Alpha and the Omega and the Beginning and the End” is both alluded to and then firmly identified:

17 When I saw him, I fell at his feet as though dead. Then he placed his right hand on me and said: "Do not be afraid. I am the First and the Last. (NIV)

In the next chapter, John, the apostle who fell at the feet of the First and Last relates the pastoral oracles He sent to the seven churches of Asia mentioned there. The First and Last unveils a portion of His glorious identity each time He turns His attention to each one  and Revelation 2:8 and 18 make crystal clear Who the First and Last is:

2:8     "To the angel of the church in Smyrna write: These are the words of him who is the First and the Last, who died and came to life again.

2:18   "To the angel of the church in Thyatira write: These are the words of the Son of God, whose eyes are like blazing fire and whose feet are like burnished bronze. (NIV)

Jesus Christ is the Son of God who died and came to life again. And here the verse majestically assigns to him the glory of his divine Lordship and Deity. Revelation 21:6-7 cannot be any plainer on this point:

6    He said to me: "It is done. I am the Alpha and the Omega, the Beginning and the End. To him who is thirsty I will give to drink without cost from the spring of the water of life.

The First and the Last, the Alpha and the Omega prophetically promises rewards to the future overcomers of verse 21:7 the same way he promised blessings to the overcomers in the seven churches two millennia ago (praise God, Jesus is still the same yesterday, today and forever as the Scripture says) and the specific promise here is that He will be his God and the overcomer his child. If Jesus is the First and the Last, then we find Him promising to also be the God of those who faithfully follow Him. If there is any doubt at all that Jesus is the Alpha and Omega, it is dissipated by verse 16 of Revelation 22:

And, again, who is He? The One saying He is Alpha and Omega clearly speaks:

16    "I, Jesus, have sent my angel to give you this testimony for the churches. I am the Root and the Offspring of David, and the bright Morning Star." (NIV)

We haven’t discussed the connections of the Revelation imagery of Jesus as the Groom of the Bride and Husband either, but we think just studying these verses alone make very clear a truth Shamblin heretically overlooks: the God who is “everything” to Remnant Fellowship is called Jesus Christ in the same verses she claims that teach just the opposite (and it’s more than just too bad they don’t give Him the glory that is rightfully His AS being God manifest in human flesh). One can only assume that there’s a Biblical truth here that she is just willfully ignoring and making a very big effort to breeze past it. But this is like being in the crow’s nest of the Titanic as the iceberg came out of the darkness and acting as if the seas were clear of them. Her blithe redefinition of the ultimate reality of who our God and Savior is criminally without excuse. God’s Word will not allow such an obviously heretical and intentional oversight of His self-revelation that kind of luxury. She simply doesn’t want to grapple with the great revelation of Scripture that Jesus Christ is both Son of God and God the Son, so she just pathetically ignores it.

And in following the lead of their shepherd, there’s a whole lot of the Remnant flock who are also ignoring God’s Word also. Worst of all, they attribute this frightfully bad example of ignoring God’s clear self-revelation to the leading to God’s Spirit! Only He alone knows why the several hundred people in Remnant could have read this statement and who actually looked up the Scriptures to see if she taught the truth. I think it is clear that she is utterly missing the mark on this.

and God has given Him all authority as Messiah, Lord, Master, Father of the First Born and that He has created all things through Him (Colossians 1:16).

Again, this sounds like a statement of orthodox Christian truth, but we must again be reminded to not let the face value of this statement lead us to believe that this is what Shamblin is stating here. One of the well-hidden principles of cultic deception relating to the usage of language is that cults freely reinterpret whatever vocabulary they see fit to serve their ends. They seek a cloak of superficial orthodoxy to cover their heresy, attempting to hide their falsehoods behind whatever vestige of truth they can. And Remnant is no different. As we go through this study, we will see that Gwen Shamblin’s usage of these terms breaks with established Christian definitions of them.

For now, it must be noted that when Shamblin speaks of Christ being “given .. all authority”, she is referring to His receiving supreme power from His Father as if he never had it to begin with. We will see that her treatment of the Lordship of Jesus Christ is a far cry from the Biblical one. By noting what the diagram has already graphically presented to us about the nature of Christ, we find that Shamblin’s view is that Christ is not equal with His Father in power and authority, that there is a hierarchical divide between them that practically relegates Him to being likened to being an “elder brother” to all God fearing people everywhere, one that could only be “Master” as His Father granted it.

In short, if there is only “THE GOD” as Shamblin dramatically emphasizes, then we are left wondering what kind of being Jesus Christ really is. For all of the titles she would use to provide a lip-service reverence of Him, we see that while she calls Him “Lord” and “Master”, she doesn’t begin to explain what that means in the context of her religious views. And the practical outcome of what she asserts in this “Essence Of God” document only redefines what those high-sounding titles  mean in her nebulous theology. As I said, she raises more questions than answers when she tries to sound like a sage on a mission, sent to enlighten us with spiritual “truth” supposedly lost. The rest of her document really never answers this essential question, although we do hear her providing more details on her views of what Jesus’ mission was:

Jesus is the sacrificial Lamb of God that was sacrificed for our sins and through His blood we are reconciled back to God. Through His blood we can now enter the presence of God that is, since the curtain has torn through the sacrifice of Christ we can enter the Most Holy of Holies (Hebrews 10:19). Because God has told us to follow Christ and love Him, we obey God and we love and obey Christ as our Master, Great Shepherd, Messiah, Lord and the Son of God. We pick up our cross and follow Christ in suffering and shame and in sacrifice for this is the will of the Father.

Again, Shamblin paints another masterpiece of deception in bright, bold orthodox colors. While she sounds as if she is both affirming the Atonement of Christ by a recognition of His Sacrifice and the personal implications of it for all who believe, she then slam dunks her heresy right between the receptive eyes of those reading it. Her “total obedience” concept is what surely is meant when she mentions that “we obey God and we love and obey Christ .. we pick up our cross and follow Christ in suffering and shame and in sacrifice ..” Remnant Fellowship members know all too well what kind of suffering and shame and sacrifice they are expected to enthusiastically and wholeheartedly embrace in their “doing” of the “will of God.” We know also very well what this means since we’ve studied this doctrine extensively: to Shamblin, the following of Christ is to enter into a never-ending and exhaustive treadmill of religious self-denial, self-renunciation and performance of many laudable moral objectives in practical life. But to her, this “doing” is what bestows the grace of God on you. This works-centered “righteousness” completely denies the truth of Ephesians 2:8-9 which makes forever clear that it is by faith alone in Christ that the power of His sacrifice is so abundantly poured upon us.

For Shamblin and her Remnant constituency, then the curtain has not only yet to really be torn away from the Holy of Holies – indeed, they have to fight through their own firestorm of self denial interspersed with an intentionally embraced welcome of Remnant micromanagement of their lives and consciences, as well as compulsory submission to Remnant “shepherds” who are men and women just as sinful and weak as they are. So as warmly as she speaks of reconciliation

with God here through Jesus, she makes very clear the spirit and tone of it when she chooses to describe this “obedience” as one involving personal effort exclusively and not faith in Christ first (out of which one would then gladly endure and suffer for Him, but which holds out a promise of abundant and rich living not wrapped up in self-mortification).

It’s a religious shell game just as deceptive as those I saw practiced in grimy old briefcases on wobbly stands by crafty-eyed men in rumpled suits and 5 day old beards when I lived on the streets of Chicago. They were hustling for their daily bread. Shamblin’s cunning is no less predatory here.

Go To The Next Article      Back To The Spiritwatch Home Page