The Catholic Chronicles by Keith Green 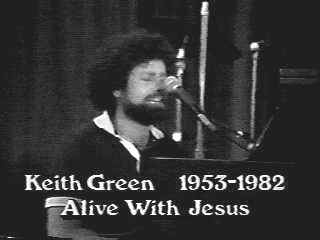 Keith Green. Keith was a Christian musician who made his entire life an act of worship and an embracing of the high calling to Christian service. Though he's been gone for years, killed in a tragic plane crash in 1982, his legacy lives on. He was a man who had been radically transformed and wondrously used by the Spirit of God to touch countless thousands, if not millions of lives, boldly challenging them to sell completely out to the cause of the Gospel through his music ministry, his teaching, and the Last Days Ministries, a work both he and his wife Melody began in 1979.

The Catholic Chronicles Series we now present to you is part of the fruit of those all too short years of Keith's consecrated work that we felt should not be forgotten. LDM discontinued their publication in the early 1980's, at Melody's direction. Yet the Difference - the eternal Protestant/Catholic tension - was something that the Chronicles clearly helped to define, and I know of no more better, readable and concise introductory work than Keith's series.

I do not know if Keith knew anything about the Difference until he came across it during his ardent study and research in pursuit of a deeper Christian life. But the issue gripped his heart and mind as Melody recalls in Keith's biography she wrote in 1989, No Compromise (Sparrow):

One day, Keith was reading a book about the Catholic Church. He came flying into the Kitchen looking very upset. "Mel, can you imagine this? Catholics are really devoted to Jesus - right? They build big churches, with beautiful statures and everything. But this book claims that some of them don't realize they can really know Jesus. Imagine - loving Jesus, but having no assurance of heaven."

Keith read more books about Catholic doctrine, and as he did he started to feel that he should write something about it. He prayed for a long time - and got counsel from other Christian leaders. But the counsel was divided. .. Keith was torn, but in the end he believed the Lord wanted thim to go ahead and write something. When Keith launched into the series he called "The Catholic Chronicles", he wrote a forward to clarify what he was trying to accomplish:

I want to make it completely understood that neither I nor anyone else at Last Days Ministries have anything at all personally against Catholics. We know of many loving, committed and sincere believers among their ranks. In fact, there are quite a few who receive our newsletter, even a priest in New England who corresponds regularly (and if you're reading this now - I love you!)

I came out of Catholicism about the time the Chronicles were first published, and came across them in 1983 in tract form. To this day, I have never felt that these works were judgment or unfair. Only those who cannot handle the uncompromising pursuit of truth can have a problem with them. They are factual, balanced and worthy of consideration as the Difference perseveres, and we are proud to offer them here. Except for some minor editorial changes, each Chronicle appears here as it was first published by LDM. We are happy to allow the teaching ministry of Keith Green to once again confront error and uphold the truth with no compromise.

Back To The SpiritWatch Homepage        Go To Catholic Chronicle 1