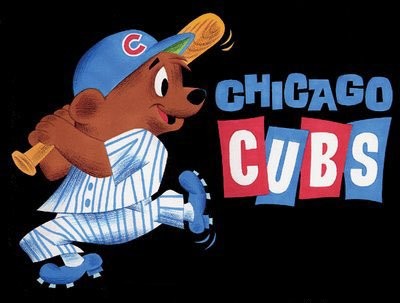 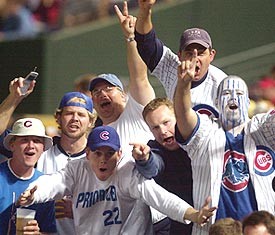 To be a Chicago Cubs fan is to be part of a family of inexpressible yearning yet undying hope, a hungry house half starved and yet always filled, always looking ahead and always looking back. All families with roots have deep traditions: for the many among the Cub Nation, I suggest they can be captured in three basic truths we live and die by. There's first an unfailing and hallowed reality in our knowing that next year is always here. White pinstripes and blue caps with red C's are always in fashion and the Cubs will keep plugging at it until it finally comes together - and it's getting closer now. Another family tradition is a moral clarity that sharply defines what baseball good and evil is. Good always resides in the third base dugout at Clark and Addison in the North Side. Evil abides in the Cardinals always hated and the White Sox ever loathed. And perhaps the most fundamental, the most hallowed, is that we always hope. We always dream. We never say never. Ever. From the drunken yuppies rooting in the bleachers to the grandma and grandpa urging their 3 year old little moppet in a Cubs cheerleader's dress to yell "Go Cubs!", the tradition goes on and will never stop. It provides its' own unique contribution to what is wonderfully and cleanly pleasurable in this sad old world. I never tire of delighting in it whenever I see it among the Nation whether in California or Philadelphia or aboard the Friendly Confines. It is part of American life and human nature. It is right. 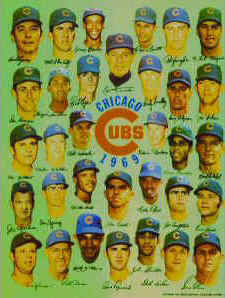 It was the stars over Wrigley Field that steered me to the Cub harbor, and you might say it was my density, but I kid you not. It was August 19, 1969, one of those sweltering dog days filled with screaming cicadas and an endless starchy yellow sky, in which my  life forever changed. My DNA code wonderfully shifted – my weltanschauung became a cosmic consciousness that transcended space and time. It was on my 9th birthday, when Ken Holtzman's no-hitter and a brand new Ferguson Jenkins mitt initiated me into the Cubs Nation for good. My parents sat transfixed before the shipping crate sized old color TV set at the house. I cradled that mitt on the floor by the TV. It smelt fresh and clean and was the color of Cracker Jack the way they made it at Sears and had Jenkins' potent, boldly defined signature embossed black and stark in it’s palm. It's now old and cracked and covered in autographs, and it is the living connection to those first days of admiration, which, after a lifetime of citizenship in the Cub Nation I have never regretted. The suspense was there and Ken did his thing. And my father made sure I understood that the man who signed it was part of a baseball team we were watching that very day doing battle at a place called Wrigley Field. Mike Royko would tell me later it was called Cubs’ Park. No matter.

If baseball stadiums were cathedrals, Cubs' Park became to me and still is Notre Dame. From the bleachers to the big red sign out front, there is no greater house that passion has built. Fenway Park? Feh! Yankee Stadium? Don't make me laugh.

I watched the ever accursed Mets wreak their havoc, but never flinched as my nine year old optimism knew the Cubbies would be back. I came to love those bricks and that big green scoreboard as surely as my hearth itself. And family always knows you’ll come home - and we're all awaiting that day when 1908 will once more be just a date and the Nation will let out a collective explosion of jubilation unseen since that day. For us, the Chicago Cubs are the focus of our dreams and ideals of what baseball should be:  we will go down -- and up -- rooting and praying and chanting them onward to victory. When they don't, we confidently look ahead, knowing that they will not be denied forever. The "lovable losers" are real contenders now. The tweaking will soon bear fruit. The world will soon wonder. The "curse" will soon reverse. Watch it! 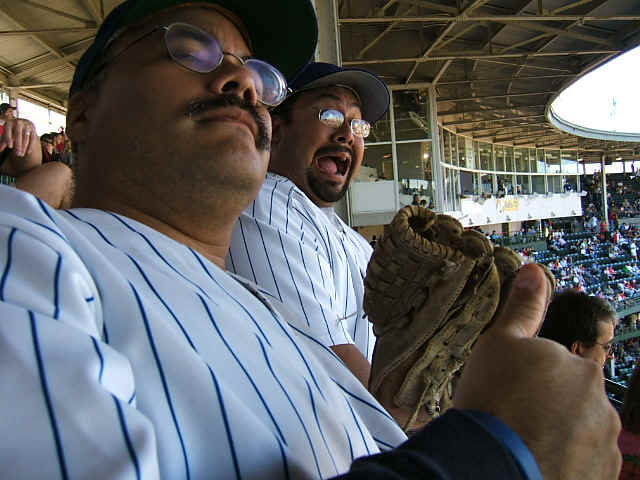 Since that hot day in 1969, I've been possessed by that conviction. I've never looked back. My four brothers and mom never did. No real Cub fan will. We know this unlike the "baseball fans" of clubs who don't even see half their own raggedy tribe at their soulless stadia until playoff time looms.  The Cubs didn't need marketing strategies or sausage races to keep us connected.  We've watched breathlessly with the Nation all of the efforts of those journeymen of the 1970's, the boys of summer in the 1980's and witnessed the 1990's unfold into this 21st century chase for the ultimate fruit of their labor: a return to the World Series. When they Chicago Cubs do so, as they eventually will (remember, you gotta wait until next year), they will get there backed by the most longsuffering yet diehard fans this world will ever know: the Cubs Nation. And I will be right there with us all, still screaming, weeping, laughing, sighing but ever rooting them on .. we will enjoy that moment like no one else will. Our Cubs and our Nation will overcome. We shall be Number One.

The infidels all around sneer that our Nation's love of the Cubs is a denial of reality, a cruel paranoiac cheat. Let those ding dongs with no vision say what they will. We laugh right back – we’re not blind. We see more honestly than you can imagine, yet with eyes of faith undimmed by such hollow contempt, always knowing the game is never really over. That conviction tides us over generation after generation. We are loyalty itself in a unfaithful world of cynical attachment and fair-weather "fans" who are clueless about commitment.  And what got us here to this point is our staying the course as guided by our collective wisdom, those traditions we've handed down over the years. We have come to live and even thrive on a diet of victories and losses that no other fan base can hope to survive on. For us, every victory is a celebration (click to watch by Real Video what the joy of the Cubs Nation looks like) and  every streak a party. Every loss is an opportunity to learn from. For the shallow cynic, we should have learned to go elsewhere. For the real fan, we've learned that loyalty keeps us rooted and grounded at Clark and Addison. Here we stand. We can do nothing else - because we don't want to. Our eyes are quite wide open, thank you, but we always believe. Always.

Through programs and pograms, mistakes and misjudgments, the Nation endures.  We watched the Cubs let go of Eckersly and Maddux  and Willis. Yeah, we all remember Elia's potty mouthed. frustration. We haven't forgotten the implosion of a Hooton, the breakdown of a Hundley, Jr.  and the ignoble end of a Sosa.  We can remember the DeJesus errors along with the Steve Dillard Streak. We've watched Moreland drop his proverbial routine fly and beheld Farnsworth melt down and kick that harmless fan. But for now, here, this moment, it doesn't matter. From the perspective of our Nation's hallowed traditions, we'll hang in there. From Sutter, Dawson, Cardenal and Cey, from Pappas and Grace to those traded away, we’ve kept the faith. The bad breaks of the past few years will not last forever. The time is at hand. And nothing in recent memory more fires our imagination and stokes our home fires than Derrek Lee's 2007 cell phone message he texted to a few of his teammates in true Cub form, which so perfectly conveyed the essence of the hope of our Nation with a simplicity so stunning and yet so timeless: "This is the year."

No argument from us.

So we’ll live and die this year and every year with Cubby blue in our souls like a sometimes bittersweet but always beloved melody of nine innings wreathed by brick, ivy and no lights in the most beautiful city on the planet. We'll always dare to say every year as Lee has that "THIS is the year." It is an article of faith. It is a foundation we stand upon, something that explains why White Sox fans are so anally jealous of the loyalty of the Cub fan they see all around them. We shall arise!

It was said by a well known Cubs fan that the hearts of those of us in the Nation are mostly scar tissue. That may be true, but such tissue still feels, still responds to the outrageous twists of destiny that confront our team year in and year out.

Here's a purely personal testimony to this: on that beautiful sunny day of September 17, 2005 when the Evil Ones took the division at Wrigley, I was there with my brother and our wives, who had no choice but to become Cub fans with us also. As the Cardinals fans caterwauled, and we seethed, we of the Nation from Wrigley knew a long winter was ahead but were comforted in the fact that Next Year was coming. So I never flinched when outside I went to a memorabilia shop right outside the park, tore my Cubs jersey off and handed it to them to be customized. Here's what it now looks like:

So now, once again,  we all breathlessly await for the Cubs crew to emerge from their hibernation with a new round of hot bats, blazing pitching, sharp fielding, and sharper base running. And rest assured we will all be there .. the Cubs Nation and my jersey that celebrates my entry into our family as I bleed Cubby blue to my last breath.

Let's go, Cubbies! .. the Cubs Nation will still chases the Promised Land of October with you. We've knocked at the door several times the past decade, and Jack's Century is about to end .. next year! 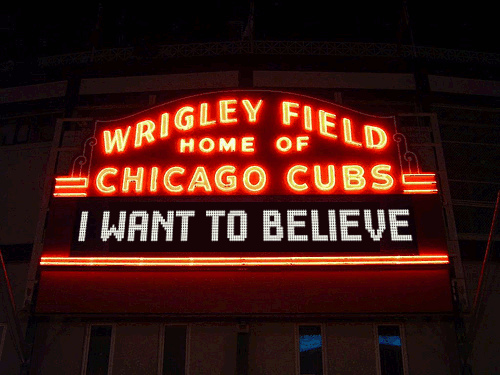 By the way .. a bleacher sign held by one of the Cub Nation once asked 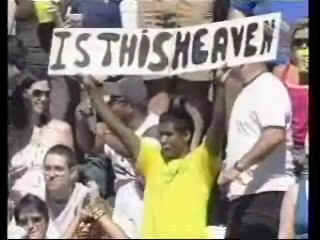 Not quite, but if you want to know how to really get there, read on and click HERE

Back to the Spiritwatch Home Page