Against a backdrop of rolling countryside becoming tinged with the warm hues of autumn, the blue GMC van glided smoothly southward towards Chattanooga, Tennessee as I gave way to a silent reverie of homesickness. Bradley County, indeed all of Tennessee, was a lovely place to be in the fall, "but it ain't home," I mused. Being from the busy, urban landscape of Chicago and a 26-year old freshman at Lee College in Cleveland didn't help the situation. But I was where the Lord had specifically directed me to go, so despite the setting, I enjoyed a true peace of mind. Knowing that you're in God's will and that He will not leave you comfortless by the fact that he will never leave nor forsake you is enough to get you through anything.

I wasn't alone at that moment either. I was riding with several other Lee College students on a very special trip. As members of Lee's very own Pioneers For Christ student outreach ministry, our interest was being geared towards the Bible study we would soon be attending. We would be meeting with some very unique individuals whose single mindedness and devotion to their visitation program and their fellowship was most impressive - so impressive that we wanted to meet them, get to know them and to learn more about their work. The group of students I was riding with were part of one of PFC's newest ministries (it actually had just been organized barely three weeks before). Most of us were freshman; the experience could do nothing but good for us. We needed this interaction with these folks to help strengthen our ministry; we anxiously awaited our arrival.

Soon countryside turned to suburban sprawl, then abruptly, the sight of central Chattanooga emerged as we headed southward into it's heart by I-24. The modest cityscape was shortly swallowed up by the black maw of a dark off-ramp as our driver left the interstate and set course down a busy main artery. Several minutes and two turns later we parked before the humble and unpretentious building where we would enter into a Bible study with these unique people. What made these folks so special was the fact that there were few people like them across the city, not to speak of the country. Few of the Church of Jesus dared to aspire to such an incredible dedication to their task as they did. They were hated by the heathen, reviled by the religious and even members of the little flock of Christ's Body held nothing but contemptuous mockery for them. Yet their assemblies, scattered across the nation and the world were known for a zeal and fervor that defied whatever stood in it's way. These God- fearing men and women we were about to meet shared in that forceful, powerful and compelling faith their brothers around the world also had. We had much to learn that morning.

When we arrived, the meeting had already started. The presiding elder was introducing the team of ministers who would be overseeing the remaining part of the service. We took seats hastily around the packed congregation. I sat with a nervous and pretty blonde Georgian girl who had come to learn as I had. For a few minutes, my attention wandered as I looked discreetly around the room out of the corners of my eyes. Their sanctuary was furnished modestly, with stacking chairs serving their seating needs. A small upright piano hugged a wall by the rostrum, which was equipped only with two tables and sets of chairs. The only other feature in the room was a massive set of bookcases containing Bible study books in one corner. The congregation was well-dressed, attentive, and - most striking - thoroughly integrated racially, with an even share of white and black families and individuals scattered around. With Bibles and study guides in hand, they all appeared intently ready for business.

After an hour of the service had gone by, and some interesting commentary on door-to- door visitation had ensued (complete with the ministers' participation in role-play encounters and critiques of their witnessing), the service was dismissed by the presiding elder, a grave, silver-haired man. With great reverence, he invoked the power of Jehovah God upon the congregation's efforts to spread "the Gospel of the Kingdom" across Chattanooga, despite the opposition they faced. As he prayed, we prayed as well, invoking the power of the Holy Ghost upon ourselves to be fearless witnesses to the Gospel of Christ to all nations. It was a riveting moment I shall never forget, for the pleading of the Blood of Christ and His power to be His witnesses in His service is never a light thing - and the eternal fate of lost souls heading for a Christless hell lies in the balance of our commitment to that reasonable service.

We arose to mingle among the congregation. I had a lot of questions to ask these dedicated people, while the pretty Georgian blonde was too nervous to ask anything. "You can talk to them if you like," she querulously murmured, clutching her lace-edged King James Bible close to her in a white-knuckled death grip. Not wanting to cheat her out of a blessing, I smiled at her. "There's no reason to be so tense. After all, they're people too, you know! Why don't you talk to them? You could really learn from this."

The girl's eyes widened. She swallowed and gazed uneasily around us. The congregation members were animatedly talking one to another, smiling, showing off immaculately dressed infants, laughing. Race met race there. Certainly, I thought, no more reasonable a people must be here! "They won't mind a good discussion about the Bible, would they?" I wondered aloud.

"You talk to them, o.k.?" Her expression and tone of voice clearly ended any further entertaining of her participation in such a conversation that morning. My friend wasn't being rude or brisque - but she certainly seemed most intimidated. I sighed. Why are people so afraid of each other?

I turned. The rest of our PFC group was milling about the crowd, shaking hands with wan smiles, introducing themselves to the animated and friendly folks. What is to be worried about here? As I gazed, though, a real nervousness began to blossom like a poisonous weed within me: a dull ache in the pit of my gut began to spread throughout me. My mouth suddenly felt full of cotton. I felt I needed and wanted to say something, yet I knew what was potentially at stake here. How easily I could make a fool of the Lord, myself, Lee College, and the Church of God before these people if I didn't ask questions wisely, circumspectly, and carefully!

Communication was what was needed. My words needed to be, oh, so carefully phrased and wisely chosen. There needed to be no stubbornly dogmatic argument nor pointless discussion running off on fruitless tangents as I tried to understand the mission and life of these God-fearers. The girl I was with clearly wasn't up to entering into a dialogue with our hosts. It was up to me to break the ice .. I felt strangely cold inside. Jesus, help me. Give me the right words to say ..

With a nervous swallow, I left the aisle seats we both had sat in, my companion shadowing me. We smiled at two elderly people who seemed quite pleased to see us. They smiled warmly back. "Good to see y'all," they said, pumping our hands. The two left us there, so we moved on and mingled. As we walked up the aisle, our path was suddenly filled by a squat, bullet headed gentleman who was also all smiles. "Hello!" he ejaculated "Fritz Pederson, sir," followed by an extended hand. I grinned back and introduced myself and the girl. Fritz seemed pleased, too. "I hope you folks enjoyed our meeting this morning. Where are you from?"

"Oh, well, " I began, "I'm from Chicago and we just stopped in to partake of your services here. I'm staying in Cleveland right now."

Fritz perked up. "Cleveland? Hey, I got some people there. Nice little place it is. What do you do there?"

"Well, Mr. Pederson, I'm going to school there at Lee College." The faintest shadow of a flicker of recognition went across his rugged, blunt face. "Lee College - Lee College - say, that's a Church of God school, isn't it? 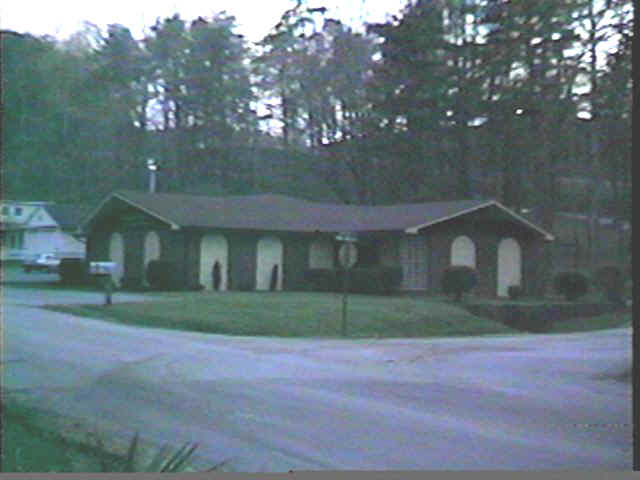 "Yessir," I gulped in as cool and unfazed a manner as I could muster before his slightly narrowing eyes. "It's a Church of God institution." My colleague stood very quietly, a feeble smile trying to assert itself on her face. She too had noted the change in his manner, too. "Well, sir, wait here just a minute. I got a friend who I think you'd be interested in meeting," Fritz chimed in. "Be right back."

He turned to a knot of men in energetic discussion and took one of them aside. The gentleman was taller than Fritz, thinner, with lean and angular features and thinning, grey-streaked hair. His face was impassive, stolid, almost mask-like as Fritz spoke to him. "I wonder who he is," my friend whispered. "Beats me," I replied. "I sure hope we haven't offended anybody."

The two men walked up to us, with Bibles in hand. "Rafael? I want you to meet brother Jones. He used to be Church of God once." The confidently casual, smooth words knived into me; my blood froze and a great sorrow filled me, all but drowning what little poise remained. He was Church of God once. "That is until he joined our local congregation here."

"Yes," Brother Jones intoned with a voice of conviction, eyes green and cold. "I left the Church of God about five years ago. I was a member for over thirty years," his raspy, throaty voice snapping out thirty. "But one day, somebody from the Kingdom Hall here visited and helped me." Fritz's eyes were savagely aglow with a blazing gleam that I stared at, even more shaken. I'd seen eyes like that in the faces of hunters after bagging big game. In them were the pursuit, the stealth, the patience, the focus - and the prize.

By this time, my blonde companion's features were unabashedly pained, her child-like visage round with incredulous alarm. He was Church of God once. Brother Jones looked at me. "A Chicago man from the Church of God, eh? What are you doing here?" It was a challenge, a finger jabbed into my chest. And I couldn't help but wonder after this awful shock: "what AM I doing here?" I couldn't look them in the eye anymore for some reason. I had to break contact momentarily, and in doing so, my eyes flitted over the sign by the doorway we'd entered the sanctuary. It was only for a split-second, but it was one of those moments you never forget when an image is burned into your psyche by the fire of confrontation. It was a large and carved wooden one which read in huge block letters

Fritz's features, flushed so utterly with triumph over this prize catch, and his prey's own testimony fed the black sorrow that groaned deep within my spirit. In one agonized second of eternity, somehow the world around me seemed to grow dark as I sensed an unspeakable evil beyond description rise up before us in mockery and abominable wickedness. All I could do for that momentarily eternal horror was hear those words again .. and again .. To this day, they still haunt me. He was Church of God once ...

And to think it all began at a doorstep, with a knock on the door.

Back To The Spiritwatch Home Page