What  Happened To The "Creator's Promise"? 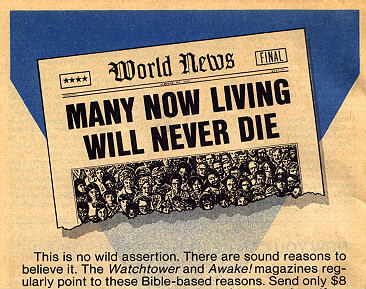 Whether or not you were alive in that  year or not,  1914 should mean  more to you than a mere calandar sheet curled and yellowed with age or a headline on a crumbled magazine page.  It is a momentous year that touches  you life  today."  WT,  1 April  84

If you are a Jehovah's Witness, you are certainly aware of just how vitally important the Watchtower Society has made the year 1914 to your eternal destiny. Millions of your brothers and sisters "in the truth" around the world have been assured for years by the organization that "1914 is indeed a focal point of Bible prophecy" (WT, 15 April 84, p. 6), and did their best to live their lives accordingly, foregoing families, careers and personal desires to preach the "gospel of the kingdom" through full and part time field work.

You are also aware that, according to the Society, from 1914 onward, world conditions have worsened dramatically, with ever-increasing advances of war, famine, pestilence and human wickedness. These make up a "composite sign, one composed of many symptoms .. of Satan's dying society" (ibid., p. 6, 7). These signs, say the Watchtower, are conclusive evidence that Armageddon is truly at hand - this chart in the Society publication Survival Into A New Earth on page 27 makes this quite clear: 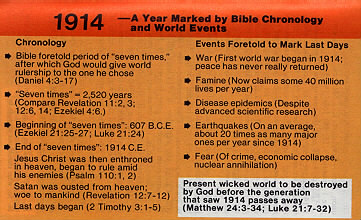 Notice the last paragraph; it repeats what is perhaps the most essential conviction of Jehovah's Witnesses worldwide, a belief that has sustained them through many of their trials and tribulations: "some of the generation living in 1914 will see the end of the system of things and survive it" (You Can Live Forever In Paradise On Earth, p. 154). The Society taught for years that the prophecy of Jesus in Matthew 24:34 concerning "this generation" clearly identified them as some of those people who beheld the events of 1914 and who would survive Armageddon to enter the New World of Paradise Earth. This belief has helped to fortify the faith of generations of Witnesses from Argentina to Zimbabwe. The Awake! publication's masthead through the years has also in no uncertain terms assured Witnesses that this belief is not an overzealous speculation but is instead "the Creator's promise of a peaceful and secure new world before the generation that saw the events of 1914 passes away."

Now it seems that "new light" has been shed upon the Creator's promise by the Watchtower Society, and it would now appear that 1914 isn't as momentous as it appeared after all. The November 1, 1995 Watchtower now claims that "the term 'generation' as used by Jesus refers principally to contemporary people of a certain historical period, with their identifying characteristics" (p. 17). This new view is now being advanced as to what Jesus really meant when he referred to "this generation" in Matthew 24:34. The Awake! masthead - from the November 8, 1995 issue onward - has been brought in harmony with this "new light" when it speaks of "the Creator's promise of a peaceful and secure new world that is about to replace the present wicked, lawless system of things." Strangely, the generation that saw the events of 1914 don't seem to be as important as they once were.

You may have noticed several remarks in the Watchtower study articles that emphasized an actual downplaying of the need to watch any particular generation or time frame at all! Note:

But the Society had been telling us for decades that "Jehovah's prophetic word, through Christ Jesus, is this generation of 1914 will by no means pass away until all things occur .. Jehovah who is the source of inspired and unfailing prophecy will bring about the fulfillment of His son's words in a relatively short time. .. you may live to see the promised new order along with survivors of the generation of 1914, the generation that will not pass away" (WT, 15 May 84, p. 6-7). Jehovah's Witnesses were certain that Jesus' words directly applied to these times - but now the Society seems to be saying otherwise and is supplying a "more precise viewpoint."

What does all of this mean to you? The Watchtower now has effectively repealed "the Creator's promise" when it uses this "more precise viewpoint on 'this generation' " (p. 20) to discontinue the use of their old interpretation of Matthew 24:34 ! Simply put, the bright hopes of your brothers and sisters are now little more than "old light" that merely was "adjusted" away ! Those who continue to cling to it will be singled out as disloyal and haughty for refusing to follow Jehovah's progressive organization by accepting the faithful and discreet slave's feeding.

How can "the Creator's promise" be so easily swept aside by the Society? Because it never really was "the Creator's promise" but the speculations of a group of men ! It has been swept aside as easily as the old light that Bethel once held concerning Armageddon in 1914, 1918, 1925, and 1975, and whether or not the men of Sodom will be resurrected. It was dismissed as easily as the old light the Society once followed that banned vaccinations, organ transplants and higher education - after millions of your brethren suffered terribly and lost so much trying to follow what they thought was "food at the proper time."

Yes, the claims that the Society has made concerning "the Creator's promise" in regards to the generation that saw 1914's events must certainly NOT be viewed as divinely inspired truth. Rather, these promises must be understood for what they are - the sectarian dogma produced by religious leaders trying to control the lives of millions of people through empty promises and vain predictions - Luke 11:45-46.

"It is a serious matter to represent God and Christ in one way, then find that our understanding of the major teachings and fundamental doctrines of the scriptures was in error, and then, after that, to go back to the very doctrines that by years of study, we had thoroughly determined to be in error. CHRISTIANS CANNOT BE VACILLATING - 'WISHY-WASHY' ABOUT SUCH FUNDAMENTAL TEACHINGS. WHAT CONFIDENCE CAN ONE PUT IN THE SINCERITY OR JUDGMENT OF SUCH PERSONS?" WT, 15 May 76, p. 298

"Where Else Can You Go, Brother?"

You've heard that question perhaps whenever you questioned; it demands an answer, especially if you've ever begun to wonder if the Watchtower really is "God's visible organization." If  the Watchtower is botching the truth, who can you turn to? Here's the best answer to that .... 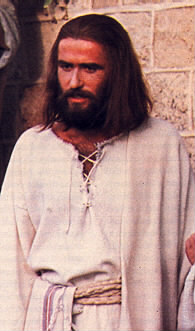 Jesus! We recommend all Witnesses to "consider closely .. the Chief Agent and Perfecter of our faith, Jesus." ( Heb. 12:2-3ff, NWT ) For He himself settled the matter of just "where else" anyone can go who looks beyond the closed world of the Watchtower when He stated so clearly that

"Come to me, all YOU who are toiling and loaded down, and I will refresh YOU. Take my yoke upon YOU and learn from me, for I am mild-tempered and lowly in heart, and you will find refreshment for your souls. For my yoke is kindly and my load is light." ( Matthew 11:28-29 NWT )

It is only by turning to and trusting in the promises and person of Jesus Christ that real and eternal truth be found. He embodies the love of the Father by the presence of His Spirit, whom He will send to all those thirsting for Him and His righteousness (Matthew 5:6, Luke 11:9-13). In Jesus and  Jesus alone lies your greatest fulfillment, the ultimate answer to all your questions, the open arms of genuine grace, and a sure future without the strings of human tradition attached. We urge you to turn to Jesus, confess and repent of your sins before Him and believe upon Him for real salvation and real peace, that you too might receive the Promise that "is to YOU and to YOUR children and to ALL who are afar off, just as many as Jehovah our God may call to Him" ( Acts 2:39 NWT ), that you too may be given "authority to become God's children" ( John 1:12 with 1 John 5:13 NWT ).

That's a promise from the Creator that no amount of new light will ever outshine!

Back to the SpiritWatch Homepage     Back To Jehovah's Witnesses