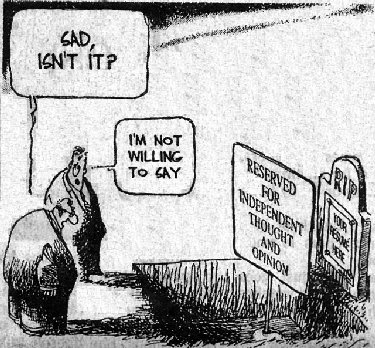 While Robert Lifton's list of eight criterion concisely define the operative principles of mind control, there are also 10 distinctive and highly visible signs that can be found in an environment where it is being practiced.

This list was first formulated by the former researchers of the Cult Awareness Network before its takeover and co-option by the Scientology cult organization. Any legitimately questionable group or relationship need not exhibit every trait to be considered destructive; in fact, according to cult exit counselor Bruce Laughton, "the presence of only one or two of these traits indicates a genuine need for real concern."

To help you understand what constitutes mind control, we list these ten traits here which can be used to discern the subtle difference betweeen the healthy and toxic influences you may be facing in your life. I have expanded upon these principles with further observations.

1.)   CHARISMATIC LEADERSHIP - the unquestioned obedience and submission to the claimed authority, divine appointment, and knowledge of a central leader or group of leaders who demand such obedience to prove the individual's faith, motives, integrity and trustworthiness.

2.)    TOTALITARIAN WORLD VIEW - a "we-versus-they" view of the outside world designed to enhance the group's identity, goals, and welfare at the expense of the individual. Group members are the heroic "good guys", and outsiders are the villainous "bad guys."

3.)   ELITISM - benefits of belonging are unobtainable to outsiders but available to the loyal only through association with the group - from personal empowerment and spiritual highs to fulfillment and ultimate salvation. The group views itself as the only one with "the truth" and lives accordingly.

4.)   DECEPTION - the group's free usage of dishonesty, falsehoods and questionable claims in both it's indoctrination of new members and it's rejection of "outsiders" who seem critical of the group. Any media and literature used may be characterized by deceptive and misleading claims.

5.)   ALIENATION - the group's active encouragement of it's members to remain separate from those family, friends and parts of society opposed to group ideals. The outside world is viewed as sinful, ignorant, Satanic and must be fully withdrawn from - thus reinforcing the group's control.

6.)   FATIGUE - the deprivation of members of sleep, needed rest times and free time with the insistence that long hours of work and meetings are a means of demonstrating true faith, real dedication to a cause, or determination to succeed.  The effects of mental fatigue impair the individual's ability to critically think  or even rationally function, leaving them open to manipulation.

8.)   EXPLOITATION - a broad trait ranging from pressure to give all of one's wealth and time to the group to the usage of guilt, secrecy and emotional manipulation to maintain control: the threat of expulsion is a particularly powerful leverage of control, as is verbal, sexual and even physical violence.

9.)   CHANGE IN DIET - under nourishment as well as unhealthy nutrition used to keep members mentally dulled and thereby less able to engage in independent thinking - the greatest enemy of destructive cult groups. Mind-altering toxins, drugs and chemicals are used in some foods sometimes in deliberate fashion.

10.)  LACK OF PRIVACY - individuals are not allowed moments of private solitude or contemplation which may lead to independent thought: frequently, group members live and function in society together, and monitor each other closely (particularly in family situations) to ensure conformity to the group's proscribed lifestyle.

These ten traits are all designed to accomplish one central cult goal: indoctrination into the group's belief system with a simultaneous shutdown of independent thought. The nature and precise details of that belief system will differ sharply from group to cause to philosophy to study group, but the human dynamics involved are always the same.

When you find a group of warm, friendly people who have all the answers, whose group claims to speak for God or possess "true enlightenment" exclusively and encourages you to stop thinking for yourself, you have found a destructive cult - no matter what the label, exterior reputation or collection of testimonies would say otherwise.