The Scriptures Of The LDS Church 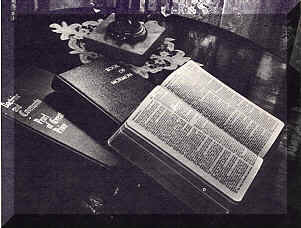 The Book of Mormon: Another Testament of Jesus Christ is divinely inspired scripture, as is the Holy Bible. They are used side by side in Church curriculum with other approved scriptures: the Doctrine and Covenants, a compilation of revelations and writings given since the Restoration began, and the Pearl of Great Price, a selection from the revelations, translations, and writings of the Prophet Joseph Smith  -- from the LDS Church web site

"..because that ye have a Bible ye need not suppose that it contains all my words, neither need ye suppose that I have not caused more to be written .." 2 Nephi 29:10

To virtually every major theistic belief system under the sun, the role of a set of sacred writings in its doctrine and practice is essential for it to proclaim and define what it deems as spiritual and moral absolutes that have been delivered to it as inspired revelation from the divinity it seeks to establish firm association with. Historically, Christianity has been no exception, in that it holds to the Bible as its source for this spiritual authority, with the exception of Roman Catholic and Orthodox adherents who also accept oral tradition as equal in authority.  Yet in sharp contrast to Christianity, the official position of the Church of Jesus Christ of Latter Day Saints is that it accepts not only the Bible but other "scriptures" as Holy writ, as the Eighth Article of Faith of the Church states:

How did the LDS Church come to accept the Book of Mormon as "the word of God"? It came about as a result of its belief that God today continues to speak to the world through divine revelation that as authoritative and binding as the inspired declaration of the Biblical prophets and holy men. This claim, asserted by Joseph Smith, the church's founder since its 1830 inception, was finally clarifed as a doctrinal belief called continual revelation and is concisely defined in the LDS Church's Ninth Article of Faith:

9.We believe all that God has revealed, all that He does now reveal, and we believe that He will yet reveal many great and important things pertaining to the Kingdom of God.

Direct revelation from God is invoked in the operation of the Church's calling and placing of its leaders, the direction of its programs, and timely guidance in personal and family relationships. It is difficult for those who are not Church members to understand how all-pervasive this concept is to the rank and file Mormon constituency, as this official LDS statement makes it clear:

Divine revelation for the direction of the entire Church comes from God to the President of the Church. The Presidents of the Church down through the years since it was restored in 1830 have been and are viewed by  Latter-day Saints as prophets in the same sense as are Abraham, Moses, Peter, and other such biblical leaders. Parents are entitled to revelation for
raising their families, and individuals are entitled to divine revelation for meeting personal challenges (from the LDS Church website).

To the LDS Church, the extent and value this continual revelation is so fundamental to its faith and practice that James Talmadge, the LDS leader who authored the Articles Of  Faith, stressed that "revelation is essential to the existence of the Church in an organized state on the earth." And foremost in this consideration is that God has spoken, is speaking and will continue to speak tothe world through the mediation of the "restored Church", primarily through its President and "living prophet". The Book of Mormon, as well as the other two "standard works", are viewed as the product of this continuity of revelation. They are described as follows in the LDS doctrinal primer , Gospel Principles on pages 50-51:

"The Church of Jesus Christ of Latter-Day Saints accepts four books as Scripture: the Bible,the Book of Mormon, the Doctrine and Covenants, and the Pearl of Great Price. .. The Book of Mormon is a sacred record of some of the people who lived on the American continents between about 2,000 B.C. and A.D. 400. .. "

"..The Doctrine and Covenants is a collection of modern revelations. .. This book contains the revelations regarding the Church of Jesus Christ as it has been restored in these last days .. (explaining) the organization of the Church and (defining) the office of the priesthood and their functions. Other sections .. contain glorious truths which were lost to the world for hundreds of years. Still others .. shed light on teachings in the Bible (and) .. contain prophecies of things to come."

" .. The Pearl of Great Price contains .. (clarification of) doctrines and teachings that were lost from the Bible .. valuable information about the creation, the gospel, the nature of God and the priesthood .. (and ) the doctrine of the redemption of  the dead.

What do these "scriptures" say? Where did the LDS Church receive them? How did they produce them? Should all God-fearing people who accept the authority of the Christian Scripture also accept these "scriptures" as equally authoritative? The answers to these questions are essential to an informed and balanced understanding of the teachings and practices of the LDS Church, and our articles are now presented for your examination to this end.

Back To The SpiritWatch Home Page       Back to the Mormon Church