Unification Theology And The Cross of Christ

The most universally recognizable symbol of Christianity is the cross of Jesus Christ. For believers it represents the love of God, a love that would not even spare heaven's most precious treasure.  For most of those outside the faith it represents an absurdity, and for the Jews, a blasphemy.  No other doctrine of Christianity divides believers from unbelievers like the cross of Christ.

There is a story that well illustrates this point, albeit with humor.  A woman bought a set of audio cassettes for her young son. dramatizing the life of Christ.  He was fascinated by the person of Jesus, his life, his miracles, and so on.  But when the tape started to describe Jesus' crucifixion, the boy became very upset.  He crossed his arms, stuck out his lower lip, and pouted. His mother happened to walk into the room at this time and noticed how upset her son was.  She asked him what was wrong and he said, "I don't like what they did to Jesus, nailing him to that cross." His mother explained to him that by dying on the cross Jesus could forgive all of his sins and give him eternal life.  Undaunted, he said, "I still don't see why they couldn't have just glued him on!"

The Apostle Paul said it so very well in 1 Corinthians 1:18, "For the preaching of the cross is foolishness to those who are perishing, but to us who are being saved it is the power of God." (1)   The cross is at the heart of the biblical message, and Evangelicals have championed the theologia crucis, the theology of the cross, ever since Martin Luther.  Like the boy in this story, most people are offended, confused, outraged, at the idea of a crucified Savior.

Of the many new religious movements to arrive in the United States over the last two centuries, none have taken offense at this doctrine more than the Unification Church (hereafter, "UC"), founded by Rev.  Sun Myung Moon. (2) The following quotation is representative of the UC's understanding of God's purpose in the cross:

Christians have traditionally believed that Jesus' death on the cross was predestined as the original plan of God.  No, it was not!  It was a grievous error to crucify Jesus Christ.  The crucifixion of Jesus was the consequence of the sheer ignorance of the people of Israel concerning God's dispensation.  God's will was clearly for the chosen people to accept and believe in Jesus (Jn. 6:29, 10:37, 38) and receive salvation (3).

What the UC presents is a way of salvation independent of the death of Christ upon the cross.  Also, the UC believes it stands in relation to the Christian Church in the same way as the first Christians stood in relation to Judaism.

They have a radical message that is unacceptable to theological orthodoxy, one that does not include the commonly understood meaning of salvation.  It is their heartfelt belief that they are the fulfillment of New Testament Christianity in the same way Christianity was of Judaism. 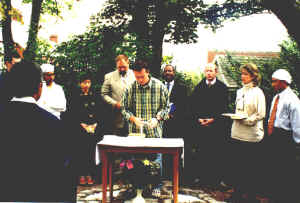 However, as their full name implies, they are the Holy Spirit Association for the Unification of World Christianity.  Nothing less than the unification of all Christian Churches (and all religions, economics, politics, science, etc.) is their goal.  An important step in this direction is the wooing of the Evangelical branch of Protestant Christianity.Part of their strategy for accomplishing this goal has been to sponsor several conferences in Japan and Korea under the auspices of the Interdenominational Conferences for Clergy.  My wife and I attended one of these conferences in February of 1988.  We had the opportunity to discuss Unification theology with some of their church leaders and theologians, which sparked my interest in doing research on the cross in Unification theology.

While in Korea we also had a chance to discuss the relationship of the UC and Evangelicalism over coffee with Richard Quebedeaux, who has been organizing conferences such as the one we attended for over ten years.  Quebedeaux writes that the UC likes these conferences with Evangelicals because, "it's a real intellectual dialogue between two groups of people who think that theology isn't just important, it's of ultimate seriousness." (4) This common ground offers hope that we can, indeed, engage in meaningful dialogue.

The UC has always felt an affinity with Evangelicalism because, as one Unificationist puts it, "it is a bastion of morality for the Christian world," (5) and that is a strong focus for their theology.  The UC has attempted to build bridges to the Evangelical world largely through meetings and conferences such as the one my wife and I attended (6). Quebedeaux believes that Rev.  Moon's broad ecumenical vision in sponsoring such conferences has been misunderstood and maligned in the press. Quebedeaux himself was once skeptical of the UC, but he later came to see it as "a place where agape is worked out so well."  (7)

It will be helpful to focus on this point briefly.  Rev.  Moon believes that by uniting all faiths, politics, etc., the world will be able to defeat the three great enemies of the human race now in existence, namely: increasing immorality (expressed as extreme self-centered love), disunity between nations, races, cultures, and religions, and atheistic communism.  The end of such unity and its victory will be nothing less than the Kingdom of God on earth (8).

Quebedeaux says Rev. Moon targets intellectuals of any persuasion, not just Evangelical theologians, because "in the long run, intellectuals who manipulate the symbols of understanding in specific societies have the most impact." (9)  He believes the dialogue that is going on between intellectuals and the UC will determine whether or not it becomes more sectarian.  Another possibility, one that holds promise from the Evangelical perspective, is that the UC "will come to appreciate the centrality of Scripture and Christ more than it seems to now" (10).  Dr. Herbert Richardson adds,

People like myself are eager to work to hold the Unification movement within the Christian tradition and to strengthen that attachment.  Other people, by attacking the [Unification] Church, are trying to push it outside in a sectarian way.  It seems to me that theologians play, especially in respect to this movement, a very important formative role in determining the future of the Unification Church in relation to Christian tradition (11).

The purpose of this essay is not to "attack" the UC and attempt to "push" it out of the mainstream of Christian tradition.  Rev.  Moon and the UC have demarcated themselves from the Christian tradition by denigrating the centrality of Scripture and the place of Jesus Christ, especially his cross (12).  Finally, I have come to understand that many of the people I have cited positively in the church's behalf have at this date either left the UC or their opinions have changed toward Rev.  Moon and the church.  However, their views were representative of Unification theology when they were published, and that is the reason I have used them.  My prayer for all Unificationists is that they come to understand these words of the Apostle Peter:

For you know that it was not with perishable things such as silver and gold that you were redeemed from the empty way of life handed down to you from your forefathers, but with the precious blood of Christ, a lamb without blemish or defect.  He was chosen before the creation of the world, but was revealed in these last times for your sake.  Through him you believe in God, who raised him from the dead and glorified him, and so your faith and hope are in God.              1 Peter. 1: 18-21

1)    This and all subsequent Scripture quotations are taken from the New International Version of the Holy Bible (NIV).

2)    The Unification Church's first missionary, Young Oon Kim, arrived in 1959, and the Church was formally incorporated in California by       September 1961.

4)   Darrol Bryant and Durwood Foster, eds. Hermeneutics and Unification Theology (New York: The Rose of Sharon Press, 1980), 39, emphasis his. Quebodeaux makes a point that all Evangelicals should remember when he says,

I have been criticized for, with whatever notoriety I have, legitimizing Unification. All I can say about legitimacy is that every person is created in the image of God and is legitimate. Unificationists are so legitimate that Christ died for them.

6)   Richard Quebedeaux, "Under the Umbrella: The Reverend Sun Mvung Moon's Goal and Strategv for the Unification of Christianity and Other World Religions"in  The Future Of The World, ed. Andrew Wilson (New York: International Cultural Foundation and International Religious Foundation, 1987). 64-67.

11)  Ibid., 77. Unificationist Joe Tully, said in 1980 that "most of Unification thought is in formative stages of development. " Darrol Bryant, ed. Proceedings Of The Virgin Islands' Seminar on Unification Theology,  Conference Series no. 6 (New York: The Rose of Sharon Press. 1980), 145.  If this is true, then as Evangelicals we should be looking for ways to be a part of this process by sharing our faith and our hearts with them.