What The LDS Missionaries Won't Tell You At The Door 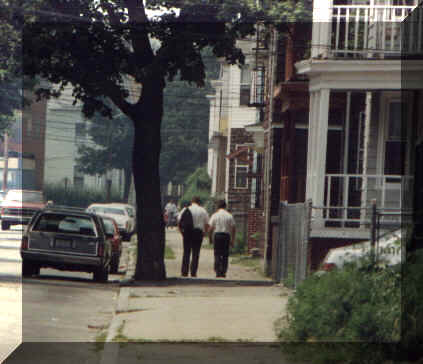 by Rafael Martinez, Spiritwatch Ministries and Eric Kettunen of

There are few more tragic things in life than to see a beautiful fantasy slain by an ugly fact. Before you make any decision to proceed with further involvement with Mormonism, we would like to ask you to consider the other side of the Mormon story that you are unaware of. The missionaries at your door will be teaching what they call "milk before meat." Let's see what this "meat" actually is so as to make a more objective and informed judgment on Mormonism's untold story.

What You Won't Hear About "Heavenly Father's Plan"

There are quite a few things about the Church that the missionaries who appear at your door or the Mormon neighbor won't tell you. You won't be told that Mormons view their church as the only true church on earth. You won't hear that Christian clergy are viewed as the blind leaders of the blind or that all other churches are spiritually ignorant of a "restored gospel" that Joseph Smith supposedly recovered. What you'll never hear from your missionary friends is that this new gospel teaches that one's ultimate salvation centers around actually becoming a god ruling over an inhabited planet like Earth, something achievable only by faithful adherence to LDS "temple ordinances" actually drawn from the initiations of Freemasonry.

You see, they won't tell you that  "Heavenly Father," according to Mormonism, was once a man like yourself who achieved godhood through a process called "eternal progression." You'll hear great reverence expressed for Jesus Christ, yet the missionaries won't say that they believe that Jesus Christ is a created being, a  literal son of a Heavenly Father that had sexual intercourse with the Virgin Mary to provide him a physical body to dwell in. You certainly won't be told that the Church teaches that the Savior's sacrificial shedding of blood for the sins of the world actually took place before He died on the Cross, and that it in some instances, it has no power whatsoever to forgive certain kinds of sin.

What You Won't Hear About "Another Testament Of Jesus Christ"

A central feature of your introduction to the Church will be your free gift of a copy of the Book of Mormon, considered by Latter Day Saints to be "another testament" of Jesus Christ and a companion to the Bible itself. It claims that Hebrew colonists established a thriving civilization in the ancient Americas and that Christ appeared among them after his resurrection. Missionaries will passionately entreat you to pray and ask God to reveal to you its truthfulness through a spiritual experience

described as a "burning in the bosom."

What You Won't Hear About The Truth Behind "The True Church"

The LDS Church has rewritten or covered up many original accounts of its own history in a deliberate effort to keep both Mormons and the public in the dark about the truth behind it's "divine origins."  For example, you won't be told that the original account of Joseph Smith's “First Vision” that supposedly commissioned him to establish the "restored Gospel" went through several revisions before arriving at the present day official version. Embarrassing doctrinal beliefs - such as plural marriages, false prophecies, and the teaching that Adam was God - supposedly received by early Church leaders by "divine revelation" and published in early editions of these works have also been omitted.  Does this sound like something a “true Church” would do if really it was committed to truth?

You also won't be informed that less than 40 percent of Joseph Smith's "History Of The Church" was actually written before his death. There will be no discussion about the combative and intimidating presence of early LDS Church culture among early American settlements, which ultimately helped precipitate the terrible persecution they would endure. You won’t be told about the gun battle Smith fought that ended his life (a far cry from the passive martyrdom Smith never really suffered but the Church piously claims actually occurred). These are only a few of the many things about the hardly unblemished past of the "true Church" that your Mormon missionary friends won't be bringing up as they seek to convert you to Mormonism.

What Your "Forever Family" Can Expect In The LDS Church 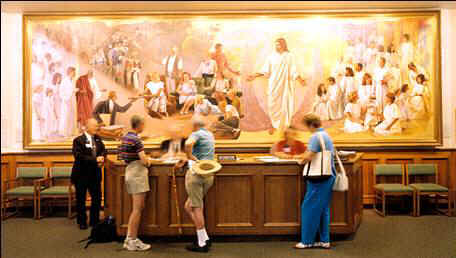 In a cold world where the foundations for enriching family life are fast eroding, the missionaries will insist that the LDS Church is the best place in the world to raise a family and to marry into. Surely, if nothing else, the sanctuary of Mormon family values and upright morality are the best hope for our country, our society, our world. The wholesome images of fervent devotion to God, civic devotion, and a nuclear family home which the LDS Church endlessly circulates easily lead one to believe just that.And with the strong emphasis of the Church upon the family as the building block of one's spiritual life and eternal destiny, coupled to the naturally deeply felt family ties any LDS family member would have with their loved ones, this is undeniably the most powerful compulsion one can find in the invitation of the Mormon missionaries calling at one's door - to be a "forever family" eternally together in heavenly unity and purpose under the benevolence of the Heavenly Father.

But if you become a Mormon you won't be informed that Church activities, rather than family ones, will take first priority in your life, thanks to the Mormon concept of "calling." Callings are religious vocational services assigned by “divine revelations” given to church leaders and leave little room for negotiation: how do you disagree with God about what you are meant to do in a calling? You won't be told how much time and energy will be taken away from both you and your family to pursue them, at their expense and yours. Sacrificing one's family life for religiosity ultimately undercuts it.

Challenging or defying these Church-sanctioned roles and any other LDS teaching and practice is considered to be a certain sign of sinful, outright rebellion against "Heavenly Father's Plan" - but this attitude is never brought up by your missionary acquaintances or Mormon friends. This is one of the facts of life in the LDS Church that you'll never be told about. Simply questioning the authority of Mormon leaders brings on inevitable and dire consequences ranging from social ostracism to excommunication. They won't tell you that many Mormons have discovered that seeking honest dialogue, discussion and answers from their leaders often has led to actions of religiously abusive censure from them.

One such method are compulsory "interviews" of "troublesome" members with church leaders who keep detailed records of each interview, which usually revolves around whatever "sin" the member has committed. In most cases, the stifling of free thought and choice is usually the reason for these "interviews": the bottom line is actually control of the member, the effort to manipulate them into following whatever direction the leaders expect of them. The missionaries, being the young men and women they are, probably have never experienced this firsthand. But many of their older Church members certainly have, but they won't be talking about it. So your missionary acquaintances won't be telling you, either.

The Alternative To The LDS "Everlasting Gospel" - The GOOD NEWS 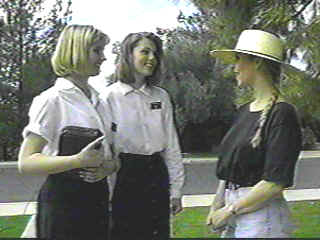 For all their sincerity and passion, your Mormon acquaintances can never share the true Gospel with you since they follow what the apostle Paul calls "another gospel" (2 Corinthians 11:4), the gospel of Mormonism. Consequently, this gospel, which the LDS Church boldly points out was first proclaimed by an angel, is under an apostolic condemnation of the highest order (Galatians 1:8). To follow it, therefore, is sheer spiritual folly. If you are truly searching for the Good News of the Christian faith, it will not be found in the fantasy of the Mormon gospel, but in the Gospel of Jesus Christ as clearly proclaimed in the Holy Bible.

The "everlasting gospel" of Mormonism is a far cry from the Biblical Good News, the Gospel of Jesus Christ. The gospel of Mormonism is a religious system of rigid perfectionism and good works which supposedly will culminate in godhood for a Mormon. But the Good News of the Bible is one of deliverance from sin - the one thing that separates fallen man from a holy God - through nothing more and nothing less than faith in Jesus Christ Himself (Acts 16:30-31; Ephesians 2:8-9). The gospel of Mormonism installs the Mormon in a process of self-redemption through becoming a god, but the Good News declares in Isaiah 43:10-11 that no God pre-existed before Him, that none shall arise after Him, and that no other savior besides Himself can ever be found. And as the gospel according to Mormonism demands that one submit to the authority of the "true church" at pain of exclusion from grace, the Good News proclaims that direct access to the Heavenly Father comes only through Jesus, the Good Shepherd who warmly welcomes all to His own fold (Matthew 11:28-30, John 10:9-11, 14:6). Indeed, in many respects, the teaching of the LDS Church so sharply contradicts orthodox Christian teaching that it cannot be considered "Christian."

Please carefully consider these things we have shared with you as you consider your involvement with the Mormon Church. As disturbing and even unbelievable as they may seem, they will enable you to make an informed choice either way. Don't view Mormons as unsavory villains - they are instead unwitting victims sincerely seeking to please God and help you. The missionaries at your door and the Church members you know - for the most part - have been kept in the dark by church leadership about many of the issues we have raised here and speak what they've been  told is the truth. But don't allow their pretty picture of a perfect Mormon world order color your judgment either. The cost to you and yours may be more than you wish to pay.