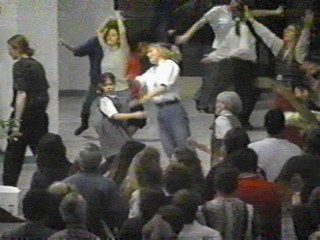 From an e-mail received during the height of the "River movement" among Charismatic and Pentecostal revivalism in January, 1999:

WHERE ARE ALL THE CONVERTED PEOPLE???

Statistics for the Assemblies of God that used here are posted on the back of the “Minister’s Letter” for July 1998 (the most recent I have). These statistics are taken from the ACMR annual report Assemblies of God churches are expected to fill out annually. This layout shows the reported statistics for 1986, 1996 and 1997 in a very informative and helpful layout.

However I can think of nothing that would account for the tremendous disparity in the claimed conversions and the net growth in AM attendance (the service that surely most clearly represents our church size). Let me put it another way using only the 96/97 comparisons from the above referenced report.

In other words although 559,501 were claimed as converted our Sunday AM attendance fellowship-wide grew by only 23,849. With 11,920 churches that’s about 2 per church! That means that only 4.3% of the reported conversions during the year apparently managed to become a part of even the main service of the week in one of our churches.

End time revival we say? The "Next Move Of God"? How many more "Now Words" and "New Moves" are we going to be hanging our hats on in light of the towering evidence that we are in an end time apostacy that Jesus warned us about in Matthew 24? How many more glib tongued prophets will persuade us to shove our heads deeper into the sand then ever before to talk in tongues and think we're in "revival?"

The following is a remembrance I recorded in a personal ministry journal kept when I was a young evangelist during a summer missions trip in the year 1988: 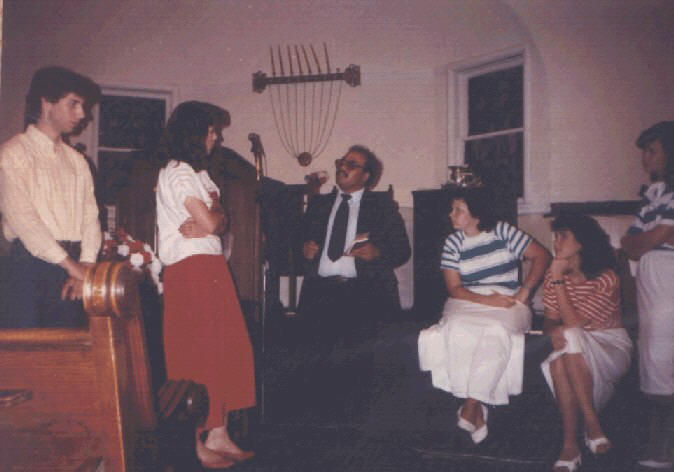 I remember when I was with the Pioneers For Christ, a  Lee College student evangelistic outreach, leading a summer missions trip from June to August 1988 and our witnessing team got pegged to publicize a "campmeeting" in the Northern state we were sent to, in the middle of a large metropolitan area. We were told to pass flyers out advertising the meeting. And as we arrived downtown to do so, we found literally hundreds of Deadheads (Grateful Dead fans) in the town and discovered from them that their rock gods were going to give ONE concert that night (the only one in North America all year). My team and I were immediately pressed to do some outreach that night. Mind you, it's just me along with a skinny kid from Canton, Ohio, a tiny little girl from the vastness of central Pennsylvania, and three Southern gals from Georgia and South Carolina. That's all we were, trying to be prayed up and and as ready to get the Gospel out as we possibly can. So what do we do?

Well, we start rather naively thinking that the Pentecostals we were having meetings with might like to help. There was no way they couldn't have not known of the deluge of Deadheads flooding their city - it was in the papers, the news, and the teeming tie-died bands of them swarmed everywhere. So we ask for volunteers after the service, which was a whopper of a time in which the youth choir got happy, the shouting was lusty, the tears flowing, and the preaching like that of an Old Testament prophet. All in all, it seemed to be a good "revival" service that was challenging Christians to return to their first love. We think, praise God, the saints will rally to get the Gospel out tonight! So several hundred Full Gospel people heard the call from the Master of Ceremonies to assist in the seeking and saving that which was lost. Guess how many responded?

Zero. Not one believer came forth. Not one.

We left after standing at the altar for several awkward moments, all alone. The two beautiful twin Georgian girls who were on my team, with Baptist roots, looked at me with an amazedly quizzical look that haunts me to this day. I couldn't look at their eyes too long after having expressed confidence that Holy Ghost revived Christians would join us. But as we left, we passed a knot of about twenty singing, gabbing, tongue talking "Pentecostals" who asked us if we were going to reach out. When we responded, hoping they were going to join us, they whooped, went "Glory", "Bless You Brothers" and flowed in the "Spirit" outside - to their cars. That shocked me big time then (it doesn't now, since I have learned that many people in "revival" are more concerned about how good they or their four feel after they leave than if it ever touches the lost).

And as painful as it was, I really didn't care. We smarted, but we didn't care. A resolve not my own made me straighten up. I looked at the slack, shocked faces of Alan and the girls and said, "let's go. If they won't compel them to come in, we sure will." We trusted God, girded up our loins and took our few hundred tracts and did our best to be a witness to literally thousands that night. The masses streaming out of the downtown ballpark where they were stopped us almost a quarter mile from it. People were literally all over the streets, the sidewalks, elbow to elbow. What an opportunity. We had many wonderful encounters. We didn't win anyone. But we were a witness. We got to confront with the Pearl Of Great Price wandering young kids, shaggy 60's refugees, and metalheads trying to meet chicks all without a clue, buzzed by doobies, and chasing something Jerry Garcia would never help them catch. In my humble opinion, I think that was more of a witness of "revival" than the Saints In Revival we were with.

And I see no trend, no groundswell mass "New Move" sweeping the body of Christ to spur us on to a final, truly God-exalting attempt to work the harvest fields. Instead, I see a lazy, sleeping church ..

I love what Nick Park, the overseer of the Church of God (Cleveland TN) in Ireland once wrote:

"We say to our people in Ireland: 'If you say you are filled with the Holy Spirit, then we want to see evidence that you have a passion to take the gospel to the ends of the earth. And if you do not have that passion and concern, we do not care if you pray in tongues every day, you are not a real Pentecostal.' Sometimes people get offended by my saying that, but we have to go by the words of Jesus. - Acts 1:8." 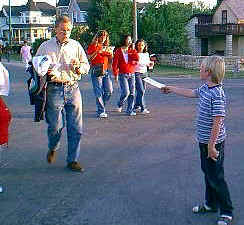 Thanks, brother Nick. That's just what I was getting at. Seeking and saving that which is lost is what we should be doing as the fruit of revival, not subsidizing the merchandising of "Revival" in nice, bright packages, Visa and Mastercard accepted. And definitely not just wandering out with our holy goosepimples and rhemas dancing in our heads, racing to beat everyone else to McDonald's or Shoney's after service.

A truly revived Christian will burn with a passionate desire to fulfill the Great Commission mandate of our Lord to preach the gospel to all people and make disciples of all nations. They aren't meant to be Billy Grahams: just your basic Joe and Mary Christian, whose son Bobby Christian, catches the same joyous burden for souls - and ends up giving tracts to Latter Day Saints at a well-attended Mormon religious pilgrimage in Utah. Or who holds their heads up high to live a life of Christian integrity in a sex-mad world of riotous excess and compromise. Or who leaves the "revival" and the "power center" with a desire to declare the Gospel of Jesus to others from boardrooms to bordellos and not necessarily come back for a self-serving dose of rhema to tickle their ears.

No heroes are needed for this kind of work, just real people who care by the power of God. Where are the revived doing such exploits?

When I can hear of verifiable reports of Christians en masse "flowing" out of their churches (starting with Brownsville and Toronto) several evenings - weeks on end, really, and not after Father's Day or after six months of prayer - and INTENTIONALLY going into the worst neighborhoods in town and witnessing until all have heard the Gospel in their communities (hey if the anointing is so strong, it should begin there, right?), then I might see justification for the noise being called "Revival" I hear floating in the land.

Until then, I am weary of hearing the word. The Body of Christ doesn't even know what that means.

There is no end time revival coming to save our necks. Just the opposite is well in hand and frankly, I don't see the church doing much to dispel this fantasy. It's so much easier to sustain, cherish and lullaby ourselves to sleep by then the unvarnished truth - the church is on the slippery slope of compromise and self-delusion and the world is half under the spell of the power of the spirit of the age, JUST AS THE BIBLE SAID IT WOULD BE. We would do well to follow the cry of the Apostle Peter:

SAVE YOURSELVES FROM THIS UNTOWARD GENERATION!