OUR MISSION: Lighting Candles In A Falling Darkness

IN HAMMOND, Indiana: a housewife who called for a free video offer on a toll free number advertised on the TNT cable network finds two earnest young men on her door step a few days later, and finds herself being introduced to "another testament of Jesus Christ." She has a dazzling spiritual experience they prayed she'd have as a sign that they are from the Heavenly Father and, thus enlightened, leaves her Roman Catholic parish in pursuit of a new "Restoration."

IN CHICAGO, Illinois: young people meeting in a Bible study group for UIC students smother a prospect with seeming concern and attention. A delicious dinner complete with Giordano's deep-dish pizza helps reinforce their positive regard. A few weeks later, the prospect will be required to confess his sins in excruciating detail to prove his willingness to "go all the way for God." These failures will be documented in files that can be called easily up later.

IN ATHENS, Georgia: an elderly couple weep recounting how their son abandoned the Christian heritage they gave him embracing unbelief after studying best selling books that "prove" that Christianity is a mythological, abusive belief system based upon church-sponsored fables. He now leads the secular students alliance at a local university and delights in mocking any theistic belief system, curiously withholding his criticisms from the religion of Islam itself.

IN JANESVILLE, Wisconsin: a class of spiritual sojourners convenes for another seven week course of instruction in metaphysics, tarot card reading, numerology and astrology to enable students to "find their own connection and get their own answers." and some of them will move on to further their spiritual pursuits with witchcraft, pilgrimages and "attuning" work. Their diets will change a bit, their hearts and minds will undergo a transformation impossible to underestimate.

IN BENTON, Tennessee: two van loads of people from the nearby city of Cleveland arrive at a local place of worship there to assist the new work's progress in the task of preaching "the gospel of the kingdom" throughout all of the vast rural Appalachian countryside of Polk County. This is their weekly assignment and this particular job of completely penetrating the hills and hollows with their magazines and heralding will be repeated every three months or so there.

IN ANN ARBOR, Michigan: a slender woman with a new hair cut confronts her husband with an ultimatum - either attend her Tennessee based-church with her and their 3 small children and submit to it's "prophet" or face divorce for no other reason. Later, the stunned man finds the church paying her legal bills and a photo of the prophet with her kids on their bedroom wall. He will find he's not alone and that families are being divided across America the same way.

IN AKRON, Ohio: a contrite and sorrowful young couple are sternly rebuked in a church service from the pulpit by their pastor, a Mobilizing Apostle, before the entire congregation for not having enough of the Spirit to be in church the previous Sunday night. They are encouraged to enter into a fast to demonstrate their repentance and to ensure they prove themselves by regularly submitting to the congregational Prophet who will "speak into their life."

Despite what pundits and secularizing culture might say, faith is still very much alive in America. People still find their reasons for belief, a steadfast trust in their religious tradition, a passion for connection with God they try to live out daily. Chicagoland and Northwest Indiana are no exceptions. 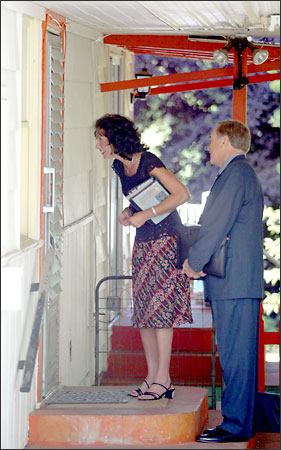 But one of the harshest of realities in life also has a firm foothold among us. Working seamlessly, shamelessly and boldly, it routinely seduces tens of thousands into a lifestyle based upon deceptive manipulation through the best of intentions. Through the zeal of well meaning and well convinced people on a mission to shed the light of their answer, their vision, this cruel bondage of mind and heart is being spread in every way possible. They'll use magazines in laundromats, bookstands at WalMart, educational programming on PBS and Cable In The Classroom, tracts in hospital waiting rooms, and eye-catching ads on TV and radio.

Most often, this deception is spread through the shared testimony, implied wisdom, and observed lifestyle of these same people. Tragically this is when its' greatest influence is wrought - at the cost of broken families, marriages, ruined lives, and shattered souls. Such people often become members of destructive cults and advocates of abusive spiritualities, antichristian philosophies and bogus belief systems that seem like a real answer to their immediate needs and personal longings.  They offer change. They grant purpose. They welcome with community And they are entirely sincere, offer wide open gates of fellowship, friendship and interaction.

Largely unseen, their pursuit of the recruit goes on minute by minute, daily confronting innumerable people with well-packaged versions of the "Truth" which in effect deny the Christian faith and substitute something entirely different. Many unchurched as well as church-going people are deceived into accepting their claims on face value, thinking that they've really found the answer to their questions and problems. Sadly, many of them do so trying to gain a new source of understanding and spiritual life and instead find religious legalism, and authoritarian manipulation, and others descend into benign yet self-occupied lives of skepticism or mystical bent, blasting Christian absolutes as crass, intolerant fables.

The peril of abusive spirituality found in cultism is a very real one, found thriving from the buckle of the Bible Belt of the Tennessee Valley and is as destructive and vital in the sprawling urban density of the Chicago Metro and Northwest Indiana areas.  Make no mistake, it has never gone away and will never just "go away." In fact, it will come looking for you - it's highly likely that you may already know friends and even loved ones who may have gotten involved or affected by their new found "truth".

Arguments, threats, mockery, and heart-felt pleas by loved ones and Christian preachers have perhaps done no good; they remain committed to their new revelation. We feel that the Church everywhere has yet to respond adequately, and until it does, the "feigned words" and "fair speeches" of spiritually deceptive cult dogma and antichristian philosophies will continue to claim victims from among it's own pews, let alone from the masses who view it dimly.

And for most of America, it's never a problem .. until it's their kid who joins a cult, their grandma who gives away all she has to a cultic leader, or their family that is divided by some mind controlling sect that seems so "Christian."

Then help is wanted yesterday.

That is why we exist.

Spiritwatch Ministries, formally called the Tennessee Valley Bible Students Association (TVBSA) is an effort at providing Christian discernment ministry. We have been commissioned by the Holy Spirit since 1993 to serve the Church and the world by countering the influence and spread of spiritually deceptive and religiously abusive groups that exist in the Tennessee Valley, as well as provide discernment of counterfeit spirituality in our apostate day.  In 2012, the ministry relocated to Northwest Indiana and is in the process of retooling for more direct ministry activity.

Our two-fold mission is to redeem and restore the spiritually abused, and to educate and equip the Church and society to do the same. This has always been our Biblically inspired passion over the years.

Click here to see how we seek to help you take heed that no man deceive you.

As a member of the Evangelical Ministries to New Religions (EMNR) coalition, we actively network with other Christians, churches, and countercult organizations to help us fulfill our mission. Our fundamental principles for this work are found in Jude 3 and Ephesians 4:15 - we are contending for the Faith by speaking the Truth in love.

Seminars, ministry opportunities, personal prayer initiatives, confidential and caring counseling and free literature on spiritual and philosophical deception is available for the asking. Contact the ministry by e-mailing us

Taking heed that no man deceive you (Matthew 24:4)

Back To The SpiritWatch Home Page